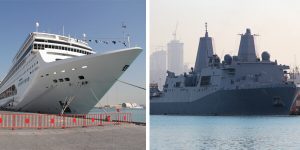 Two more giants of the sea moved into Mina Zayed this week highlighting the port’s major role in handling ships of different sizes and backgrounds.

The 59,000 ton MSC Lirica, a commercial cruise liner berthed near to the USS New Orleans in the port demonstrating its capacity to accommodate to vessels of all shapes and dimensions. MSC Lirica was the first cruise liner to use Mina Zayed as its home port and is spending the season cruising around the Arabian Gulf with 95 calls and rotations.

Since its first call last October, other cruise liners have also used Mina Zayed’s services. The Costa Favalosa with a complement of 1,100 crew and 3,500 passengers berthed in December joined by another ship making its maiden stopover ,the Aida Blu from the German line AIDA cruises, with a capacity of 2,500 passengers.

Mina Zayed enjoyed a record year in 2011 for handling containers with over 700,000 passing through its gates during the year.