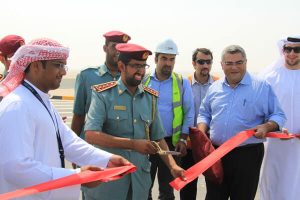 The 12 kilometre-long highway, up to six lanes wide, is the vital main road linking the flagship Khalifa Port and Kizad with the new Khalifa Port Interchange on the E11, Abu Dhabi-Dubai highway.

Captain Alsugaaier Saeed Alomeni commented: “This is a historic day and we are happy to have helped ADPC successfully achieve the opening of the road. We are proud to continue working as close partners in this important project for Abu Dhabi and the UAE as a whole”.

The Khalifa Port Interchange is expected to be officially opened to traffic by the Department of Transport next month.