Record-breaking year for Abu Dhabi Ports’ Cruise Terminal, with 48% increase in passengers and 40% increase in vessels 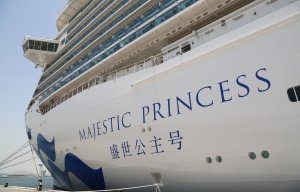 Abu Dhabi, UAE – June 14, 2017: Abu Dhabi Ports, the master developer, operator and manager of the Emirate’s commercial and community ports as well as Khalifa Industrial Zone (KIZAD), celebrated the successful close of its best-ever cruise season at Abu Dhabi Cruise Terminal with the maiden call of Princess Cruise Lines’ Majestic Princess. The company recorded booming growth for the year with a 40% increase in vessel calls and 48% overall increase in passengers to Zayed Port and Sir Bani Yas from last year.

Captain Mohamed Al Shamisi, Chief Executive Officer, Abu Dhabi Ports said that the record-breaking season was testament to the growth of Abu Dhabi, as a global hub for both commerce and tourism.

“For several years, we have made significant investments in our port infrastructure and tourism offerings to build a world-class cruise hub here in Abu Dhabi. We offer market-leading services to provide cruise passengers with value added services that address all their needs, and support the maritime tourism sector’s role in enhancing Abu Dhabi’s appeal as a leading tourism hub. Today, I’m proud to say that the Company’s vision and strategy is paying off with another record-breaking year,” said Captain Al Shamisi.

Commenting on the end of the season, Abdulkareem Al Masabi, Executive Vice President, Ports, at Abu Dhabi Ports, said: “Since developing the cruise terminal we have worked diligently and closely with cruise lines to promote Abu Dhabi as a unique travel destination. We launched Sir Bani Yas Cruise Beach as a “must visit” destination on cruise liner routes this season, which has contributed to a 40% growth in number of vessel calls this season, doubling last year’s forecast of 21% increase for 2016/2017. We look forward to launching the new season and further success,” said Al Masabi.

Calls by maiden vessels like the Majestic Princess promise a brighter future for the Abu Dhabi cruise tourism industry as a whole as well as the company. Cruise ships from European and American markets now select Abu Dhabi Cruise Terminals as preferred destinations on their routes. Most 10 nationalities arriving at the cruise terminal include Germany (48%), UK (21%), Italy (10%), Russia (5%), The Netherlands (4%), USA and Spain (3%), and Belgium, Switzerland and Austria at 2% each.

While most years the company has typically seen the cruise season end in late April/early May, the Majestic Princess vessel’s arrival at the terminal this June is testament to passenger demand to experience Abu Dhabi. It also underscores the important role that Abu Dhabi Ports, in partnership with Abu Dhabi Tourism and Culture Authority, is playing as the Emirate delivers against Vision 2030 and the national economic diversification strategy.

Off the 162 cruise vessels arrived to Abu Dhabi, the last one to call for this season is the Majestic Princess, that stopped at Abu Dhabi in between Dubai and Cochin, India as part of its 56-day route from Barcelona to home port in Shanghai, China.

The Majestic Princess is the newest sister ship to Royal Princess® and Regal Princess®, offering the Princess experience and signature favourites, plus exciting new features with a Chinese flair. The 19-story ship carries 3,560 guests, 1,346 crew and was built and launched in 2017 as the latest addition to the company’s fleet.

Naturally with the boom in numbers visiting the Cruise Terminal in Zayed Port, there has been a consequent increase in visitors to the Sir Bani Yas Cruise Beach which offers cruise ship passengers a unique beach destination with unrivalled tourism experiences. This season proved to be a great success with 33 cruise vessels calling at Sir Bani Yas Cruise Beach with an approximate 54,000-passenger total visiting the unfettered white sandy beaches.

Further enhancements and developments to the beach were announced by Abu Dhabi Ports, as they wrap up the successful season as well as added value offerings for cruise visitors, with details to follow.

Sir Bani Yas Island is one of the UAE’s largest natural reserves open to the public. Because of the Government of Abu Dhabi’s continuous investment in the island, it is developing into one of the most sought after tourist destination in the world.

The unique cruise beach is like no other in the region and was developed to meet the demand for a beach call addition to the itineraries of the world’s leading cruise lines. It gives Abu Dhabi a competitive advantage, as anchoring at this multi award-winning nature-conservation desert island adds a unique proposition to an already diverse array of passengers seeking a mix of luxury and adventure.

Abu Dhabi Ports has spearheaded the development of the cruise tourism industry in Abu Dhabi by following an approach marked by three principles; investment in infrastructure, creating a niche in the growing passenger market and ensuring maximum integration across the industry supply chain.

“This remarkable cruise beach brings a unique opportunity to attract regional cruise itineraries and enhance cruise operators’ offering. It played a vital role in increasing cruise passenger traffic in the 2016-17 season,” said Al Masabi. “Despite the few cancellations, due to uncontrolled weather conditions, the beach successfully operated for the cruise season 2016/2017 with this beautiful island, its wildlife and nature reserve offering a unique opportunity for regional cruise itineraries,” Al Masabi added.

Launched in December 2016, Sir Bani Yas Island offers its cruise visitors all the activities regularly anticipated on an island call, such as beach sports, snorkelling, kayaking, but also unique excursions such as a cultural heritage tours of the island and a safari tour of the wildlife reserve. Abu Dhabi Ports continues to develop extensive facilities for cruise passengers while keeping with local culture and always mindful of the delicate island eco-system.