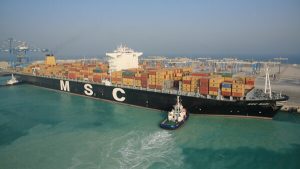 A giant project, a giant ship and a giant achievement.

It has been a magnificent performance by ADPC staff, contractors and stakeholders, inspired by the wise and supportive leadership of the Abu Dhabi government.

Only four and a half short years after the first dredgers moved into position at Taweelah and began working the open sea off Taweelah…we have commenced commercial operations at Khalifa Port, the most technologically advanced one in the whole region, and in a radius of 5,000 kilometres. In fact, you would have to go as far as Singapore to find container terminal facilities matching ours. We are proud to say that we have the only semi-automated Container Terminal in the entire MENA region.

To mark the Big Launch, ADPC’s six giant STS (ship to shore) cranes sprang into action to load and unload containers from the giant MSC Bari, a super container ship nearly 370 metres long, one of the largest in the world, and piloted into Port by an ADPC Emirati pilot, and Assistant Harbour Master, Captain Saeed Al Falasi.

Not only does Khalifa Port commencing commercial operations represent a great achievement for the Emirate, with its commitment to the ground-breaking Abu Dhabi Economic Vision 2030, it has provided ADPC with a thrilling climax to an enormously complex building project of almost superhuman dimensions.

There was massive jubilation in the Port Island marquee, as Tony Douglas, CEO, ADPC, led more than 250 people into an emotional group countdown. Joy and cheering erupted as the clock finally, finally clicked down to zero.Pride of place went to the ADPC build team, with speeches by Ashraf Al Khaznadar, EVP, Projects, followed by Bechtel, our Programme Management Consultants, as well as Abu Dhabi Terminals (ADT), who already run the Port’s Container Terminal, and the event was attended by our many contractors.

And to add to the celebrations and achievements, ADPC has turned on the lights of the entire Sheikh Khalifa Industrial Road in Kizad A in a spectacular showpiece illumination of up to 50 kilometres of road. This means that ADPC has lit up the highways and smaller roads, such as Mina Road, leading all the way from the Sheikh Khalifa Interchange on the E11 highway to the far end of the Port Island itself.

“Everyone has made a magnificent contribution. It has been an honour to deliver on time and within budget to the Government. I work for a company of superstars,” commented Tony Douglas.

The official inauguration of Khalifa Port will be held at the end of the year.