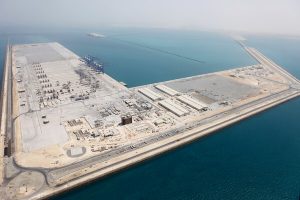 This announcement follows the arrival of the first batch which was celebrated at a ceremony held in February on the port island, attended by ADPC Chairman Dr. Sultan Al Jaber, Captain Mohamed Al Shamisi, Vice President of Ports at ADPC, and Mr. Martijn Van de Linde, CEO of Abu Dhabi Terminals.

“The arrival of this final batch of the STS cranes completes one of the most important milestones for Khalifa Port as it gears up for the official opening in Q4 this year. We thank Zhenhua Heavy Industries for their support and delivery of the cranes. Phase 1 of Khalifa Port is now 96% complete, and we look forward to launching the port by end of this year when it will become the hub for commercial container traffic in Abu Dhabi. ”

The STS cranes are among the largest of their kind in the world at 44 metres high under the spreader and a lifting capacity of 110 tons. As part of its Phase 1 capacity to handle 2 million containers and 12 million tons of cargo traffic, Khalifa Port will also handle 4 million tons of raw material cargo a year, delivered to the dedicated EMAL berth at the port, which is already in operation. By 2030 Khalifa Port will be able to handle 15 million TEUs and 35 million tonnes of general cargo a year should this be required.