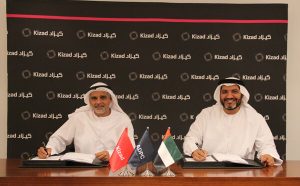 The 316,413m2 plot of land will be utilised by Al Braik to produce high grade silicon which is commonly used in the aluminium industry as an alloying agent which considerably improves the strength of wrought aluminium alloys. Silicon metal is an integral part of the aluminium production process and will become more prevalent when the casting industries grow in the Gulf region. Silicon metal is presently imported from a number of global producers.

The tonnages currently imported are substantial hence the need for a local producer. The proximity of Khalifa Port, alongside the intricate rail and road transport network, will enable Al Braik Investments (L.L.C) to maximise its market presence.

“We are very proud to welcome Al Braik Investments to Kizad and believe that they will create opportunities for a significant number of value added industries through its silicon metal production which results in the production of high grade aluminium alloys. We are also confident that Al Braik’s business will benefit significantly from the industrial zone’s outstanding access to global markets through its proximity to Khalifa port which will allow it to reach its markets with ease and efficiency. The project is also a living proof of the success of Kizad’s industrial clustering concept, as it brings together players across various parts of the industrial supply chain to maximize efficiency and reduce costs.”

“Al Braik Investments is proud to be part of Kizad with its transportation network that will provide our business with unparalleled connectivity to all our clients in the UAE and the region, giving us a competitive advantage that will enhance our production. Through our operations in Kizad we are looking to become a steady supplier of key strategic value added materials for the aluminium industry and increase local (Emirati) direct employment opportunities. All of which reaffirms our commitment to further strengthen Abu Dhabi’s Vision of diversifying its economy through investing in manufacturing.”

Al Braik runs several investments in oil, gas explorations and construction, from related construction services to real estate, hospitality and franchise. They are planning to begin construction in 2013 and shall be operational by 2015.