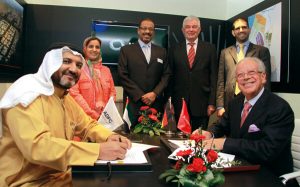 Abu Dhabi, United Arab Emirates: Khalifa Industrial Zone Abu Dhabi (Kizad) has kicked off its participation at the international Hannover Messe Fair in Germany this week by announcing that it has signed Talah Board as a new tenant on the industrial zone. Kizad is participating for the second consecutive year at the prestigious industrial fair as part of the UAE’s national pavilion, under the patronage of the DED.

The industrial zone has signed a Musataha agreement with Talah Board, a UAE based company that will produce high quality construction boards out of the waste from the date palm trees and will be distributed across the UAE and the Middle East. It will be environmentally friendly and the first of its kind board production facility in the region. Binos, the German developer and manufacturer of machines, components and technologies for the wood- and mineral-bonded board industry will provide the machines at the new facility. The signing took place on the UAE pavilion in the presence of Her Excellency Sheikha Lubna bint Khalid Al Qasimi, UAE Minister of Foreign Trade; Mr Khaled Salmeen, EVP of Industrial Zones at Abu Dhabi Ports Company; along with Mr Hatem Farah, Chairman of Talah Board and Mr Berndt Greten, President of Binos.

According to the signed contract, Talah Board and Binos will be assigned a 50,000 sqm plot of land in one of the world’s largest industrial zones. Talah Board will operate from the site, using state of the art machinery and plants for the production of the high quality boards that can be used for furniture, formwork, prefab housing, joinery works and various other uses.

“We are delighted to be part of the UAE’s national pavilion this year and we would like to thank the DED and HE Sheikha Lubna Al Qasimi and HE Mohamed Omar Abdullah for their continuous support. We are especially proud to be marking our second participation at the event by signing our first international Musataha agreement, with Talah Board and Binos. Kizad is now 85% complete and construction is well under way in preparation for the official opening of Area 1 in Q4 2012. We have now secured four local tenants, with 12 more in the pipeline, which we hope to announce soon. We look forward to welcoming our partners to our state of the art facilities while offering them nothing but the best in class services.”

Mr. Hatem Farah from Talah Board added: “We have always been eager to support initiatives taken by the UAE government, especially the ones which further support a sustainable economy and develop an innovative and environmentally friendly industrial sector. We take pride in being part of this compelling development and look forward to working in partnership with Binos and Kizad as we strive to achieve our goals.”

Commenting on the announcement, Mr. Berndt Greten of Binos , said: “ At present high-quality wood boards are imported from the international market. Today that all changed as this announcement makes it possible for the Middle East to produce their own boards using the Palm tree – a natural resource that exists throughout the UAE. Kizad was the ideal location choice for us due to its accessibility and low operating costs, as well as future market potential in Abu Dhabi. We see great opportunities for our company to grow as the industrial zone expands and we look forward to commencing operations in Abu Dhabi and a long and fruitful relationship with Kizad.”

Hannover Messe Industrie 2012, the world’s leading showcase for industrial technology is being held from 23-27 April 2012 in Hannover Germany, and features exhibitors from various industrial sectors coming from across the globe.