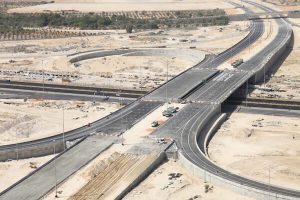 When fully operational, the 12.5 kilometer-long, six lanes, dual carriageway Sheikh Khalifa Industrial Road (SKIR) will be used for truck traffic. The opening of the interchange will deliver a key selling point to the megaproject featuring Khalifa Port and Kizad, allowing goods to be transported quickly and directly.

With the commencement of commercial operations at the Khalifa Port’s state-of-the-art container terminal in September 2012, the facility is expected to handle around one million containers in 2013, when container traffic is wholly transferred from Mina Zayed in early Q1, 2013. The figure is planned to rise to 2.5 million TEU containers and 12 million tons of cargo when the first phase of the megaproject is completed. The majority of trucks are expected to use the new road, which offers direct access.

Ashraf Al Khaznadar, Executive Vice-President, Projects, ADPC, said: “It is very rewarding for all involved to see this achievement become operational. I would like to thank all the units involved at ADPC, particularly the Projects Unit and of course our government partners and stakeholders for their continued support.  Now we can look forward to the start of what promises to be a bright future for Abu Dhabi’s industrial sector.”

The Sheikh Khalifa Industrial Road links the port directly with the 420 square kilometer Kizad, which is expected to grow into one of the world’s largest industrial zones over the next 20 years. Additionally, 60 kilometers of arterial roads such as Mina Road, Ras Ghanada Road and Al Sadr Road will be connected to the Sheikh Khalifa Industrial Road through three main interchanges. The Mina Road is already open to the public for accessing the port.

Executive Vice-President, Ports’ Unit, ADPC, Captain Mohamed Al Shamisi, said: “I am delighted that this interchange is opening, and ADPC is honoured that it has been re-named the Khalifa Port Interchange. I sincerely thank the wise leadership of Abu Dhabi for their commitment to our extraordinary megaproject.”

Executive Vice-President, Industrial Zones Unit, Khaled Salmeen, said: “I am humbled and feel immensely proud about the opening of the interchange. It is exactly what our customers need.”