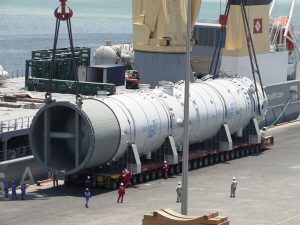 The heaviest single piece of machinery handled at Mina Musaffah has been unloaded at the port.

Musaffah Port’s Harbour Master, John Clayton, says: “This is a major event for the port and we look forward to welcoming other heavy loads in the near future. We are delighted to have been chosen to receive the cargo. The unloading went without any hitches.”