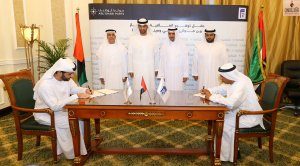 Under the Patronage and Presence of H.H. Sheikh Hamad Bin Mohammad Al Sharqi

As part of the agreement, the entities have announced the establishment of “Fujairah Terminals”, a new operational arm wholly owned by Abu Dhabi Ports.

ENHANCING THE POSITIONING OF FUJAIRAH PORTS

Commenting on the occasion, Sheikh Saleh bin Mohammed bin Hamad Al Sharqi said: “This agreement comes in line with the directives of H.H Sheikh Hamad bin Mohammed Al Sharqi, Supreme Council Member and Ruler of Fujairah, to further develop the Port of Fujairah and support the strategic role it plays in enhancing the UAE’s economic growth. We look forward to working closely with Abu Dhabi Ports in making this strategic partnership mutually beneficial both in the short and long term and enhancing Fujairah Port’s capabilities and strengths both regionally and internationally”.

Dr. Sultan Al Jaber said: “This concession agreement reflects Abu Dhabi Port’s and Port of Fujairah’s efforts to develop infrastructure in the UAE in line with the leadership’s vision to help drive economic and trade growth across all sectors. We strongly believe that developing Fujairah Port and increasing its capabilities will enable it keep up with the industry’s constant growth.”

“Abu Dhabi Ports will utilise all its capabilities and expertise to enable Fujairah Ports to achieve its objectives, based on best practices. In particular we plan to leverage the geography of this strategic port to contribute to the development of the UAE’s commercial and tourism sectors.”

The announcement is testament to Abu Dhabi Ports’ efforts to strengthen the development and operation of ports and terminals across the UAE and its contribution to the growth of a diversified, knowledge-based economy. Through the establishment of ‘Fujairah Terminals’, the agreement will grant Abu Dhabi Ports the exclusivity to enhance existing infrastructure in addition to managing all Container, General Cargo, RoRo and Cruise Ships in the Port. It further extends this exclusivity throughout the emirate of Fujairah for Container business.

The agreement also includes deepening of berths to enable the Port, which already serves clients and companies in the entire Gulf Region, Indian Ocean and Indian Subcontinent, to cater to larger vessels.

Abu Dhabi Ports will be investing in the infrastructure of Fujairah Ports, further enhancing its capabilities. Development includes deepening of berths to -16.5 metres to allow bigger vessels to come to the Port of Fujairah, building an approximate 300,000 sqm yard of storage space, as well as an additional 1km quay to accommodate the expected growth in the number of ships arriving to the port, increasing shipping operations in the process.

Abu Dhabi Ports will also work on equipping Fujairah Ports with new and advanced equipment such as STS post panama quay cranes, RTG’s as well as new IT systems, bringing efficiency to operations and better equipping it to meet the needs of global shipping companies and service operators in line with the highest international standards. Maqta Gateway, a wholly owned subsidiary of Abu Dhabi Ports will be engaged to develop a Port Community System that links port communities with various departments, facilities and operations.

Commenting on the agreement, Captain Mohammed Jumaa Al Shamsi said, “Signing with the Port of Fujairah marks a major milestone for Abu Dhabi Ports. This significant investment will see Abu Dhabi Ports share best practices with Fujairah Ports, which is one of the most important economic and commercial ports operating in the UAE, to further complement services offered at both Khalifa Port and Zayed Port. This agreement will offer clients on the east coast more options, it will also allow the re-export of goods that arrive at Khalifa Port to India, Pakistan and East Africa in addition to receiving general cargo for clients in the northern emirates.”

“The agreement has numerous mutual benefits, including the witnessing of significant growth in the Port of Fujairah in the coming years with the objective of being able to receive vessels of all sizes, in addition to an increase in freight operations, general cargo and passenger services.” he added.

“This agreement was the culmination of the joint efforts and extensive research conducted by Abu Dhabi Ports and Fujairah Port Authority, including economic and environmental studies, to implement the best means to enhance the capacity of Fujairah Terminals. Abu Dhabi Ports will utilise all its capabilities and expertise to enable Fujairah Terminals to achieve its objectives,” Al Shamisi added.

Abu Dhabi Ports will commence with the development of berths and yards in 2018. The port will remain operational during this time to service existing and new clients. Additional capacity and new quay cranes will begin operations in 2021, including the post panama quay cranes.

A SIGNIFICANT LEAP IN SERVICES

Commenting on the signing, Captain Murad said: “We are confident that working with Abu Dhabi Ports, which manages and operates one of the most important and largest ports in the region, will allow the Emirate of Fujairah and future generations to benefit from this strategic agreement. We will benefit from the experience in developing and strengthening the infrastructure of Fujairah Port, which will contribute to a significant leap in the services provided to our customers and complement the achievements and successes of the port in the future.”

The Port of Fujairah is the only multi-purpose port on the Eastern seaboard of the United Arab Emirates and is strategically located on the UAE’s Indian Ocean coast, close to the east west shipping routes. Its location offers shipping lines efficient transshipment options and an excellent platform to serve the entire Gulf Region, the Indian Subcontinent, Pakistan, the Red Sea, East Africa and several neighbouring countries.