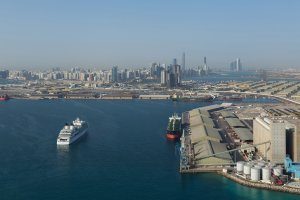 Abu Dhabi Ports, the master developer, operator and manager of the Emirate’s commercial and community ports as well as Khalifa Industrial Zone, in conjunction with Abu Dhabi Emergency, Crisis and Disasters Management Team, is preparing to conduct an “Emergency Response for Maritime Transport Accidents” in Zayed Port on May 17, 2017. The exercise aims to enhance communication and joint planning for emergency response and crisis management with participating entities.

Commenting on the major crisis preparedness exercise, Captain Mohamed Juma Al Shamisi, CEO of Abu Dhabi Ports said, “The objective of this marine transport emergency and crisis response exercise in Zayed Port is to determine the roles and responsibilities of the participating entities, highlighting their capabilities and identifying areas that require improvement.

The joint exercise will enhance Abu Dhabi Ports and the participating entities’ individual capabilities in encountering possible dangers that do require the participation of all sides.”

“Abu Dhabi Ports has the resources, expertise, and capabilities to deal with emergencies and crises through the Crisis and Emergency Response Centre, and Control Room, National Defense Centre for Fires and Rescue, as well as the necessary equipment to respond to oil spills and hazardous material in Zayed Port. We look forward to taking part in this exercise and to see efficiently we will perform,” Al Shamisi added.

Commenting on the upcoming joint exercise, Mohamed Al Tamimi, Acting VP Regulations, HSE & Security, Abu Dhabi Ports, said, “The preparatory stage for the joint exercise outlines the roles and responsibilities of the participating entities. Observers will be assigned from among the participants to evaluate the exercise. First steps and priorities taken by the response teams will be formed. Incident classification on an emergency level will be highlighted, and the leading and coordinating decision making entity will be determined. The joint exercise will ensure the availability of all resources and requirements in order to monitor the potential risks of crises and how to address them better and in a real-life scenario.”