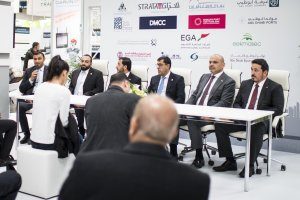 Abu Dhabi Ports, the master developer, operator and manager of the Emirate’s commercial and community ports as well as Khalifa Industrial Zone (KIZAD), is participating in Hannover Messe Exhibition, the world’s leading industrial fair, held in Germany, from 24-28 April, 2017 for the seventh consecutive year. This year, Abu Dhabi Ports chose this global platform to announce the largest free zone area in the Middle East, to the European market.

The highlight of Abu Dhabi Ports’ participation today will be a business focused presentation given by senior representatives of KIZAD, that will give further in-depth information to the media as well as prospective investors, on the newly announced expansion of the free zone area at the UAE Investment and Business Forum, a special targeted event held at Hannover Messe and managed by the Department of Economic Development of Abu Dhabi.

Commenting on the participation this year, Mohamed Juma Al Shamisi, CEO of Abu Dhabi Ports said, “Abu Dhabi Ports has been an integral part of the emirate’s rapid growth in line with the Abu Dhabi Vision 2030. Throughout 2016, the company has focused its strategies on three main aspects: expansion and growth, customer-centric processes supported by smart systems, as well as further developing its capacity.

Hannover Messe exhibition is an opportunity for Abu Dhabi Ports, the “Maritime Trade & Industry Enabler” in the region, to present its achievements and consolidated business offerings to the European market. We consider Khalifa Port Free Trade Zone (KPFTZ) a milestone on Abu Dhabi Ports’ roadmap of success. Fully integrated with Khalifa Port, the region’s first semi-automated port, the Free Trade Zone is attracting a wide portfolio of investment sectors and putting Abu Dhabi on the global map for maritime innovation. It is poised to become the future of trade in the emirate of Abu Dhabi, adding significant value to investors, while strengthening Abu Dhabi’s position as a thriving maritime hub in the Middle East, Africa, and South Asia (MEASA) region,” said Captain Al Shamisi.

Attending the global industrial gathering, Mana Mohammed Saeed Al Mulla, CEO of Khalifa Industrial Zone (KIZAD), said: “Our participation at Hannover Messe this year is unique as we announced yesterday an opportunity that many foreign direct investors in the packaging, manufacturing and industrial trade sectors have been demanding, and that is more free zone space. In 2016, and in response to the growing demand for free zones, Abu Dhabi Ports introduced Khalifa Port FTZ within KIZAD, increasing its total free zone space to over 100 million m2. Today KIZAD has over 130 local and international investors. From the 130 investors, 88 have leased land through Musataha agreements, 21 invested in KZIAD’s Logistics Park and 25 are free zone companies in different sectors. We expect a significant increase in these numbers, especially after making this announcement here in Hannover Messe to the European market”.

Khalifa Port FTZ, provides numerous advantages to investors. They can enjoy 100% foreign ownership, 100% repatriation of capital and profits, and outstanding access to markets and world-class infrastructure. Khalifa Port FTZ is already attracting global interest from manufacturing investors that will bring new technology, product diversification and increased trade through our ports. Khalifa Port, the second fastest growing container port in the world, offers importers and exporters convenient reach to more than 4.5 billion consumers within four of the world’s time zones. In addition, the free trade zone’s multimodal connectivity to roads, ports, air and future rail networks ensures easy accessibility to all of the region’s key logistics and trading destinations.”

This year, Abu Dhabi Ports is having two stands in two halls at Hannover Messe, one in Hall 3 under main UAE Government Pavilion and the other one is in Hall 17 as part of UAE Manufacturing Pavilion.