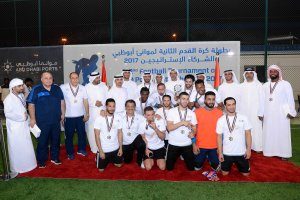 ADNOC participated with two teams ADNOC (A), who came first, while ADNOC (B) came second in the tournament. The General Authority for the Security of Ports Borders and Free Zones came third, followed by Abu Dhabi Food Control Authority in at fourth place, while Abu Dhabi Ports came in fifth place in the Tournament which has become synonymous with attracting highly competitive teams from different partner and stakeholder groups of the ports.

Commenting on the conclusion of the tournament, Captain Mohamed Juma Al Shamisi, CEO of Abu Dhabi Ports, stressed the dedication and commitment of Abu Dhabi Ports to engage its partners and stakeholders on multiple competitive levels, including sports, playing an active role in highlighting that involvement.

“We concluded the 2nd Annual Stakeholders & Partners Football Tournament with great success. We were happy to witness unprecedented participation and attendance throughout the three week period of the tournament, during which we witnessed some commendable skills and camaraderie. That success has motivated us to hold the tournament on an annual basis, and we will be seeing more versions of the tournament in the future. Such group activities foster a feeling of happiness and strengthen the bond we have with our partners and stakeholders. We would like to extend our gratitude to the fans who encouraged the competing teams, and followed the tournament with great enthusiasm and we look forward to next year’s tournament.