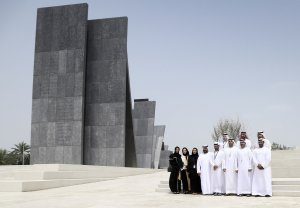 A delegation from Abu Dhabi Ports visited Wahat Al Karama (Oasis of Dignity), a permanent memorial site dedicated to commemorate the memory of UAE martyrs who made the ultimate sacrifice to defend the country and protect its sovereignty.

The delegation, headed by Captain Mohamed Juma Al Shamisi, CEO of Abu Dhabi Ports, inspected the Memorial Monument, which consists of tall standing tablets formed from cast aluminum panels, leaning onto one another, symbolizing unity between the leaders of the UAE, the nation, and the fallen heroes. During the visit, the delegation also toured the Pavilion of Honor and the Memorial Plaza.

Captain Mohamed Juma Al Shamisi, along with Abu Dhabi Ports’ employees, expressed their feelings of pride in the UAE sons who had given their lives to defend their country and humanity.

Al Shamisi said that Wahat Al Karama stands as a witness to the heroic deeds of the sons of the UAE and a symbol of their sacrifices.