Abu Dhabi, United Arab Emirates – November 1st, 2021: The General Women’s Union (GWU) and AD Ports Group celebrated the graduation of the second batch of female Emirati students who completed an intensive training programme under the ATLG 2.0 initiative, launched under the patronage of Her Highness Sheikha Fatima Bint Mubarak, Mother of the Nation, Chairwoman of the General Women’s Union (GWU), President of the Supreme Council for Motherhood and Childhood and Supreme Chairwoman of the Family Development Foundation.

Organised by AD Ports Group and sponsored by the General Women’s Union, the ATLG initiative falls in line with both organisations’ commitment to enhance the skills and expertise of Emirati women and empower them to become partners in the UAE’s national journey of technical development and achievements.

Noura Al Suwaidi, Secretary-General of the General Women’s Union (GWU) said: “We are pleased to see the continued success of the ATLG initiative and would like to congratulate the graduates of the second batch who were able to effectively leverage the lessons learned from the programme, which will pave the way for more excellence and creativity in their future careers.”

“In line with the vision of Her Highness Sheikha Fatima Bint Mubarak, Mother of the Nation, Chairwoman of the General Women’s Union (GWU), President of the Supreme Council for Motherhood and Childhood, and Supreme Chairwoman of the Family Development Foundation, we are working with like-minded partners to support Emirati women, enhance their contributions and mold them into role models for other Arab women who wish to serve their nation in various roles and workplaces.

Captain Mohamed Juma Al Shamisi, Group CEO, AD Ports Group expressed his deep gratitude to Her Highness Sheikha Fatima Bint Mubarak, Mother of the Nation, for supporting this important initiative through the GWU, and for Her Highness’s continued encouragement to Emirati women across all fields to play a crucial role in the socio-economic development of the UAE. 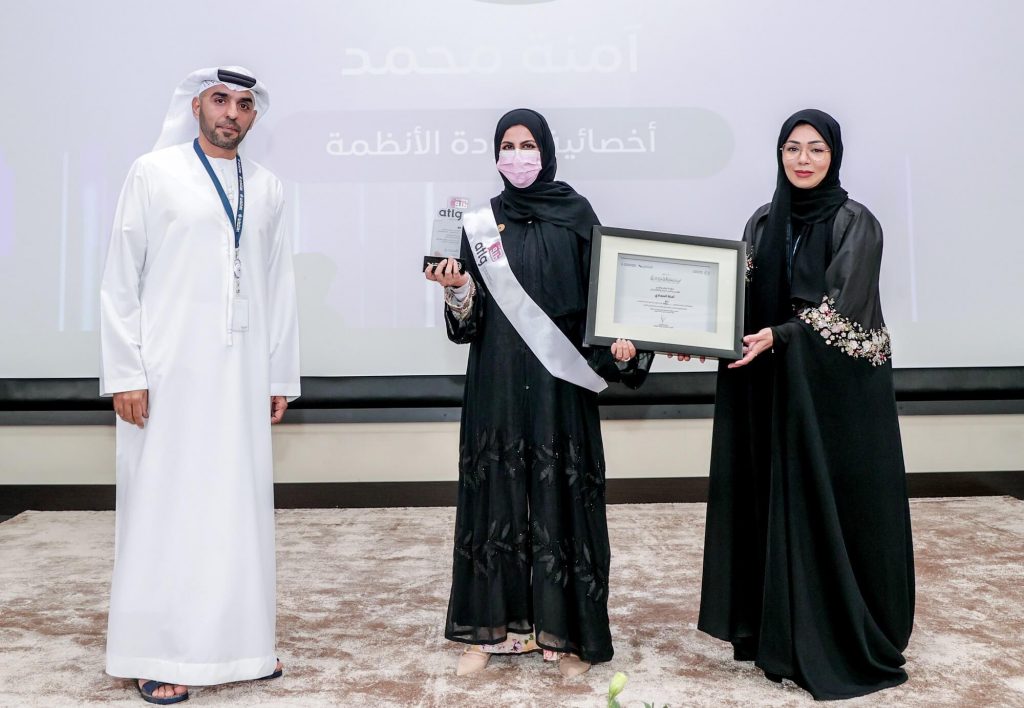 Captain Al Shamisi, said: “Emirati women are greatly supported by our wise leadership who believe in their capabilities and the importance of the role they play in the economic and social development of our beloved nation, which enables them to make remarkable achievements across numerous fields. The ATLG initiative and the quality of its programmes reflect AD Ports Group’s firm belief in achieving prosperity and development through enabling Emirati women to do their part in this noble goal.”

Dr. Noura Al Dhaheri, Head of the Digital Cluster at AD Ports Group, and CEO of Maqta Gateway said: “I would like to express our sincere thanks to Her Highness Sheikha Fatima Bint Mubarak, Mother of the Nation for her efforts and wise guidance that aim to empower Emirati women and support the developmental journey of the UAE, as well as Her Highness’s valuable support to the ATLG initiative since its inception last year. I also would like to thank and congratulate all the Emirati women who participated in ATLG 2.0 for completing the programme successfully. This achievement shall serve as a cornerstone for fruitful and promising careers.”

“Since its inception, Maqta Gateway has been keen to involve Emirati women in its development projects, to provide them with the required expertise and knowledge that will enable them to confidently conquer the world of tomorrow. Therefore, initiatives such as ATLG are not only designed to provide employment opportunities, sustainable career development through creation of a large national talent pool but also set the foundation of a technology and knowledge-based economy, and I am pleased to announce that AD Ports Group has employed 14 of the ATLG initiative graduates.”

The selection criteria of the trainees oversaw the academic performance and practical interest of the candidates, in line with the needs of the programme. The main objective of the initiative aims to enrich the practical experiences of   graduates and senior students within the final stages of their studies, and to provide them with employment opportunities in technical fields associated with strategic projects.

ATLG 2.0 introduced a number of training programmes by Harvard Business School, with the total amount of training hours exceeding 15,000. Participants of the initiative’s second batch received more than 77 Harvard-accredited certificates.

The programme also allowed participants to contribute towards the development of the Advanced Trade and Logistics Platform (ATLP), providing them with expertise in technical solutions needed to support the trade and logistics sector.

Inaugurated in May 2020 by His Highness Sheikh Khalid bin Mohamed bin Zayed Al Nahyan, Member of the Abu Dhabi Executive Council, and Chairman of the Abu Dhabi Executive Office, the Advanced Trade and Logistics Platform (ATLP) is the first of its kind in the region. It is developed and operated by Maqta Gateway, under the supervision of the Abu Dhabi Department of Economic Development and aims to integrate and facilitate the operations of trade and logistics sectors, and link the sea, land, air, industrial and free zones with all authorities regulating these activities.