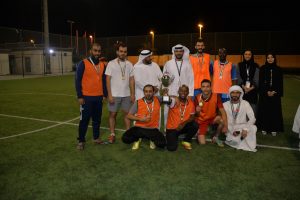 Abu Dhabi Ports has wrapped up its annual football tournament, announcing Tabab as the winning team of the accolade. The annual tournament took place at Abu Dhabi Ports’ football courts located at Zayed Port from 13 – 22 November 2017 in its third consecutive year.

For nine days, approximately 80 employees from across the company’s business units participated in the tournament, where they were split into two groups that included four teams. Group 1 comprised of Al Nokhatha, Nahaam, Ghais and Banoosh, while Group 2 included Twaash, Seeb, Tabab and Nawrus. With one team from each group qualifying for the final, Tabab and Al Noukhatha competed, before Tabab were crowned champions of this year’s tournament, with a score of 4-2.

The names of the teams were inspired by the UAE’s maritime heritage.

Abu Dhabi Ports Annual Football Tournament, which first began in 2014, is part of Abu Dhabi Ports’ employee happiness initiative programme that aims to boost employee morale and wellness. Football is considered to be one of the most popular games in the community.