Abu Dhabi–UAE, December 8, 2019: Abu Dhabi Cruise Terminal, part of Abu Dhabi Ports, had one of its busiest days of the 2019-2020 winter season so far on Sunday, December 8, when a maiden call ceremony of MSC Bellissima also coincided with a ‘triple call’.

This is one of the occasions when the cruise terminal at Port Zayed is at its maximum capacity of three ships, offering a spectacular sight on the city’s waterfront. An estimated total of 8,000 visitors disembarked on the occasion.

Inaugurated in March this year, MSC Bellissima is owned and operated by Geneva, Switzerland-based MSC Cruises, and spent her first summer on the Mediterranean before redeploying to the Arabian Gulf for the winter season. At around 315 metres long with a 171,598-gross tonnage, she features a total of 18 decks and has a capacity of 5,686 passengers.

His Excellency Saif Saeed Ghobash, Undersecretary of the Department of Culture and Tourism, Abu Dhabi, said: “Over the past decade, Abu Dhabi’s reputation as a prime tourism destination has grown tremendously, thanks to both the creation of world-class attractions, such as Louvre Abu Dhabi and the first Warner Bros. branded theme park, along with the diligent efforts of the emirate’s tourism industry to promote Abu Dhabi as a top choice for travellers.

“The increasing number of cruise operators selecting Abu Dhabi as a point of disembarkation has not only bolstered the local economy and the emirate’s tourism industry but has also played a key role in widening the exposure of Emirati culture to a global audience.”

To commemorate the maiden call ceremony of MSC Bellissima, Gianni Onorato, CEO of MSC Cruises was onboard as the vessel arrived at Port Zayed and present for the customary plaque exchange ceremony.

Commenting on the ship’s visit to Abu Dhabi, Gianni Onorato said: “Abu Dhabi is a key destination for our cruise itineraries in the Gulf, and I’m delighted that throughout the winter season the most modern and one of the most environmentally-advanced ships to serve the region, MSC Bellissima, will call Port Zayed on 17 separate occasions to bring thousands of guests to enjoy the culturally-rich, inspiring and remarkable capital city of the United Arab Emirates.”

Also docked at Abu Dhabi Cruise Terminal were Azamara Quest, operated by Azamara Cruises, and Oceania Cruises’ MS Nautica. Both vessels are around 181-metres in length and have 11 decks, Azamara Quest able to carry up to 686 passengers and MS Nautica with a maximum of 824 passengers. 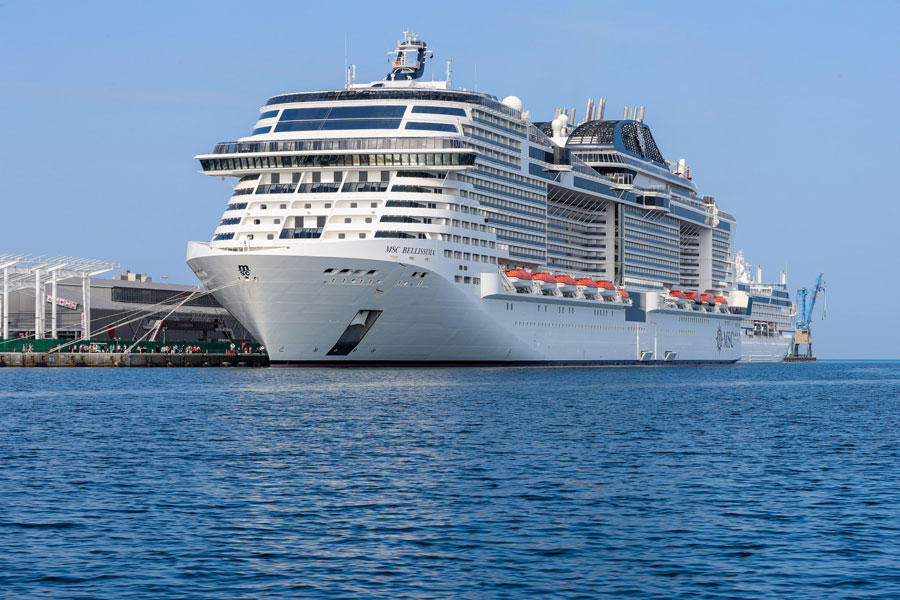