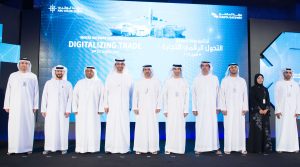 Maqta Gateway, a wholly owned subsidiary of the master developer, operator and manager of commercial and community ports within the emirate of Abu Dhabi, as well as Fujairah Terminals and Khalifa Industrial Zone Abu Dhabi (KIZAD), has showcased its recently launched Port Community System, Maqta PCS and other newly revealed innovations, at the 37th GITEX Technology Week.

Under the umbrella of the Abu Dhabi Systems and Information Centre (ADSIC), Maqta Gateway has presented a number of cutting-edge digital solutions and home-grown technology developed by the Emirates’ first port community system. These include its new high-tech mobile application, Al Manara, as well as KIZAD’s web portal. The exhibition stand was part of the Abu Dhabi Digital Government Pavilion.

At the event, the first Memorandum of Understanding (MoU) was signed between Abu Dhabi Ports and Abu Dhabi Customs under which Maqta Gateway will begin developing the custom’s first digital clearance system. The MoU was signed by H.E. Rashid Lahej Nasser Saeed Al Mansouri as the Director-General of the General Directorate of Customs and Captain Mohamed Juma Al Shamisi, Chief Executive Officer at Abu Dhabi Ports.

Commenting on the participation, Captain Al Shamisi, said: “Abu Dhabi is playing an instrumental role in driving trade towards a new digital era and Maqta Gateway is becoming a mainstay of the economy’s digital trade. The size of efficiency gains and reduction of costs the port community system is expected to bring for Abu Dhabi in the next years is remarkable. Our wise leadership has created a conducive environment for such digital innovation to flourish and our presence at the event is a reiteration of Maqta Gateway’s pivotal role and firm commitment to supporting Abu Dhabi’s strategic economic vision 2030 towards a sustainable economic development and the UAE’s aspiration to transform cities to offer smart government services.”

Al Shamisi also commented on the signing with Abu Dhabi Customs: “The signing reflects how strongly relevant entities involved with Maqta Gateway understand the importance of this advanced port community system in facilitating the movement of goods and transport through its portal.”

Dr. Noura Al Dhaheri, General Manager at Maqta Gateway, commented: “We are proud to be presenting the capital’s first port community system, Maqta PCS, at the region’s leading technology event. We have made substantial progress in the development of the system over the past years, which has seen Maqta Gateway successfully launch the Maqta PCS. Our operations are in full motion and we are seeing an exponential growth in registered users on the system, with now 37,000 voyages recorded on the system. We have developed multiple digital interfaces that complement the port community system which were designed to give users more control and a seamless experience in their trade transactions. Al Manara app and KIZAD’s web portal are our latest additions to a portfolio of over 100 digital services that are expected to boost efficiency.”

Al Manara was especially designed for Maqta PCS users to track the movement of vessels and cargo through the “Track-and-Trace” feature which provides real-time updates of the status of their shipments. On the other hand, Maqta Gateway has developed a web portal for KIZAD, which facilitates the processing of applications, renewals for business prospects who are setting-up their businesses at the industrial zones.

Maqta Gateway is a transformational project that has set out to re-define Abu Dhabi’s trade services, processes and information exchange through Maqta PCS’ unified interface that connects various trade customers, including shipping agents, traders, custom brokers, freight forwarders and clearing agents, with relevant government entities integrated within the system. Maqta Gateway has integrated with entities such as Ministry of Climate Change and Environment, Abu Dhabi Department of Finance, Abu Dhabi Food Control Authority (ADFCA), Abu Dhabi Airports, Etihad Rail and Abu Dhabi Terminals (ADT) through an MoU that was signed with Abu Dhabi Ports in the past years.

Maqta Gateway is also home to various e-services offerings such as port directory, vessels schedule, liner services and vessels tracking that offer an end-to-end solution to customers and stakeholders. The digital services of the system were developed and tested during an operational pilot phase in 2016 and the system was officially launched earlier this month. Maqta PCS has revealed future plans to integrate with international port systems as well as adopt newest technological models such as Blockchain and Artificial intelligence that further advances their services.

Maqta Gateway is participating at GITEX Technology Week for the second consecutive year.