The bulk carrier, Alfred Oldendorff, the first in several shipments to the South Quay for EGA, was swiftly followed by two large general cargo consignments, making use of the recently completed first phase of South Quay, offering a total of 650 m of quay wall comprising two berths and 37,000 sqm of terminal yard.

EGA will use the South Quay, in addition to its own nearby quay, which began receiving Capesize vessels loaded with bauxite in 2019. 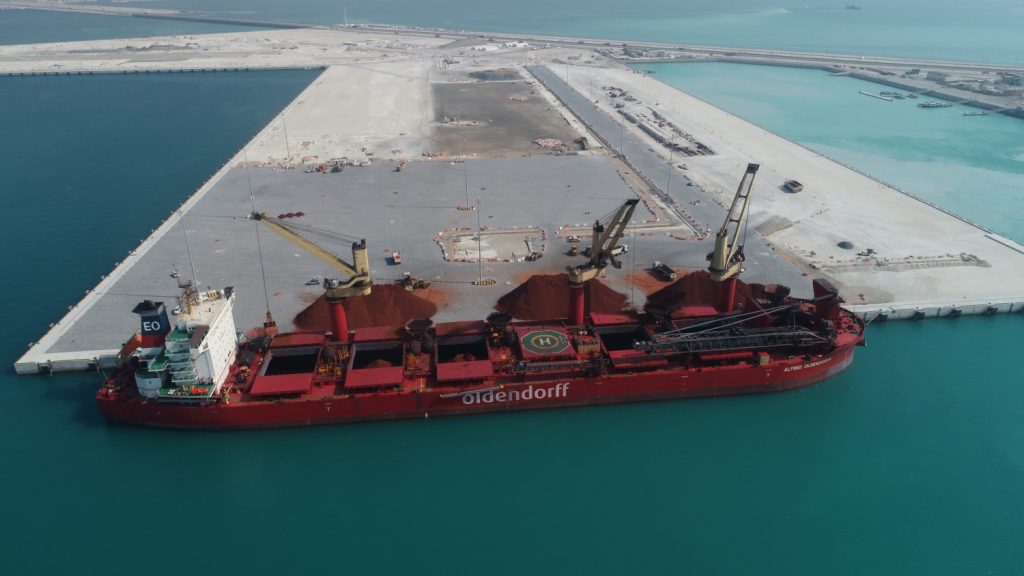 The onset of the South Quay’s operations at Abu Dhabi’s dedicated flagship deep-water terminal is the latest in a string of major achievements for the port’s owner and operator, Abu Dhabi Ports.

“The commencement of operations at the South Quay provides clear evidence that Abu Dhabi Ports stands as a leader in developing a truly inspiring and integrated multipurpose port proposition.

“Khalifa Port’s upgrade and expansion not only enables dramatic growth in our bulk and general cargo handling capacity, but further serves to demonstrate Abu Dhabi Ports’ firm commitment in supporting the individual needs of new and existing customers.”

The introduction of the South Quay, together with the adjacent Khalifa Port Logistics (KPL) development will dramatically boost Khalifa Port’s ability to handle any type of cargo and service a wide variety of customers.

In addition to the South Quay phase 1 completion, approximately 800 m of quay wall and almost 175,000 sqm of land within KPL has been handed over in advance of the project’s full phase 1 conclusion in Q1 2021.

Two prestigious accolades underscore Khalifa Port’s successful growth and development journey: the port made significant gains in the latest Lloyd’s List One Hundred Ports rankings, achieving the highest percentage of growth in all container ports listed; and also won ‘Port of the Year’ at the recently-held Maritime Standard Awards 2020.