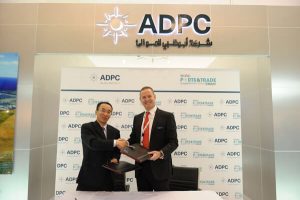 The STS cranes that will be supplied by ZPMC are designed with a single hoist and a rated load of 110 tonnes that will support tandem lift (2 x 40’) operations in the future. An outreach of 65 metres and a lifting height of 44 metres under the spreader will secure the capacity required to handle Ultra Large Container Ships. The terminal is designed to introduce fully automated transport on the quay at a later stage and for this reason the cranes are designed with a 38 metres back reach. The cranes will be delivered in two (2) batches of three (3) units each. The first will arrive in Q1 2012 and be fully operational by Q2 2012. The second batch will follow in three (3) months time from the first one.

Today’s announcement follows the announcement made by ADPC earlier this month for a contract for twenty (20) Terex Noell SC624E Diesel-Electric Straddle Carriers (1 over 1, 9’ 6”) for Khalifa Port from the German Terex Port Equipment (Noell Mobile Systems) for AED 84 million (USD 22.9 million). The straddle carriers will be delivered to Khalifa port by mid 2012.

The new deepwater gateway port that ADPC is constructing at Khalifa Port, Taweelah, between Abu Dhabi and Dubai, lies adjacent to Kizad (Khalifa Industrial Zone Abu Dhabi), which is destined to become one of the largest industrial zones in the world. The first phases of both Khalifa Port and Kizad will be completed by Q4, 2012.

Khalifa Port features a multi-purpose port island located 4.5 kilometres offshore and covers an area of approximately 9.1 square kilometres, including onshore and offshore units, and linked causeways. In the initial stage, from Q4 2012, it will operate to a capacity of two (2) million TEUs and twelve million (12) tonnes of general cargo, including the anticipated four (4) million tons of raw material cargo a year delivered to the dedicated EMAL (Emirates Aluminium) berth at the port. By 2030, Khalifa Port is expandable to handle 15 million TEUs and 35 million tonnes of general cargo a year.

In December, 2010, ADPC awarded an AED 430 million (USD 116.98 million) contract to Konecranes Finland Corporation for automated stacking cranes to be used at Khalifa Port Container Terminal. This contract covers thirty (30) automated stacking cranes which will be used for the container yard for the semi-automated container terminal under construction. The cranes will be delivered in two (2) batches to Khalifa Port: 14 units shall be delivered at the end of March 2012 and shall be followed by another sixteen (16) units three (3) months after the first batch.