The brand new state-of-the-art Post Panamax ship-to-shore cranes, which are among the biggest currently available from manufacturers, were purchased from ZMPC China. 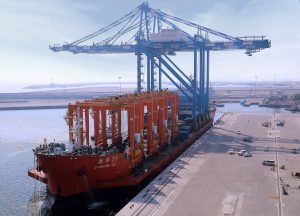 As part of the ongoing AED 1 billion expansion programme currently undertaken by Abu Dhabi Ports, the arrival of the quay cranes will provide the capability to handle close to an additional 500,000 TEUs (twenty-foot equivalent units). Boasting an enhanced propulsion speed during the movement of containers between ship and quayside, the new cranes will heighten productivity, speed up the turnaround of vessels, and increase safety.

To reach maximum efficiency in the operation of the new cranes, Fujairah Terminals seconded two UAE National graduates to China to undergo a technical training programme at ZPMC’s facility.

Additional elements of the ongoing expansion programme include a capacity increase to 1.5 million TEU, a general cargo handling increase to 1.3 million tonnes, 18 metre draft, a larger quayside, and the ability to accommodate bigger vessels.

Mr. AbdulAziz Al Balooshi, Acting CEO at Fujairah Terminals said: “The arrival of these two new quay cranes is an exciting development in the ongoing expansion of operations at Fujairah Terminals. The ambitious expansion plan underscores our commitment to continuing development of a world-class infrastructure capable of facilitating global trade and logistics and will contribute to the UAE’s economic growth.”