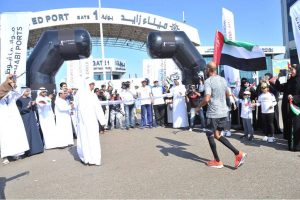 Dr. Khaled Jamal Al-Suwaidi was able to achieve an extraordinary achievement on Tuesday, 6 February, 2018, when he successfully completed his private initiative, “The Rahma Run”, in which he managed to complete a gruelling 327 kilometer non-stop ultramarathon from Fujairah Port in the Emirate of Fujairah through Khalifa Port to Abu Dhabi’s Zayed Port. He was able to cross the distance in 80 hours, less than four days.

H.E. Prof. Jamal Sanad Al-Suwaidi, Director General of the Emirates Center for Strategic Studies and Research and Chairman of the Board of Directors of the Cancer Patient Care Society, “Rahma”, expressed his pride and pleasure in his son Dr. Khaled and his delight at his son’s completion of this extraordinary challenge, made in conjunction with “The Year of Zayed”.

H.E. Prof. Jamal said: “The name of the United Arab Emirates has always been associated with noble humanitarian work. I, as a father, hope that the initiative of my son Dr. Khaled will inspire the people of the UAE to do good deeds and demonstrate solidarity with the needy and patients. This stems from genuine, humanitarian, and civilized Emirati fundamentals, values, and principles, which are rooted in the teachings of our religion and the practice of our wise leadership, which follows the approach of the late Sheikh Zayed Bin Sultan Al Nahyan, may God bless him and grant his soul peace, in providing charity and aid to the poor as well as helping those in need.

His Excellency stressed that this support and generous care emphasize the roots of the culture of giving and social responsibility in our beloved homeland.

Dr. Khaled Al-Suwaidi, after completing the challenge, said, “The Rahma Run is to be considered one of the most exciting experiences of my life. It was a dream and now it is a reality. It was not easy to complete this difficult challenge, especially through the harsh conditions that I experienced on this long journey. I would like to thank all the supporters who made every effort to make this run a success and enabled me to reach the finish line. I would also like to point out that the reason for my challenge is to support cancer patients and the Cancer Patient Care Society, ‘Rahma’, which contributes to providing financial and moral support to cancer patients and their families. It is true that the challenge has come to an end, but the humanitarian work is not over and I hope that companies and individuals will continue to support Rahma. I am very happy that I have completed this run, and I am looking forward to some comfort and seeing my wife and my twin children.”

H.E. Captain Mohammed Jumaa Al-Shamsi, Chief Executive Officer of Abu Dhabi Ports Company, commented: “Abu Dhabi Ports is extremely proud to have partnered with the Cancer Patient Care Society – Rahma through supporting Dr. Khaled’s incredible ultramarathon. The Rahma Run was poignant not only for us at Abu Dhabi Ports but for the UAE as it coincided with the Year of Zayed, which celebrates the UAE’s founding father whose impactful legacy as a global humanitarian is well known.”

“Dr. Khaled’s run from Fujairah Port to Zayed Port was no small feat and we are thrilled to have been involved in such an important initiative, one that not only supports the country from a socio-economic stand point, but also educates and inspires the community to join the global fight against cancer.”

Three years ago Dr. Khaled suffered from obesity and he weighed about 125 kg. During his visit to the doctor, the doctor faced him with the possibility of being diabetic and suffering from high cholesterol and other health symptoms. Dr. Khaled felt frustrated and sad, and this was the defining moment for him, the moment of transformation in his life. From that moment on, and after he received his two children, Dr. Khaled radically changed his life and began to work hard to improve his lifestyle, reduce his weight, and maintain his health. He was able to lose 50 kg.

On his side, Mr. Abdullah Salem Al-Kaabi, Director General of Rahma, said: “We are very pleased with the success of Dr. Khaled Al-Suwaidi’s initiative. The completion of this challenge is in fact a reflection of our society’s objectives in addressing challenges and difficulties and providing all support to these patients. Dr. Khaled’s initiative helped raise awareness of the wonderful work of charity in our society. We would like to thank Abu Dhabi Ports for their support of this initiative.”

It is worth noting that this initiative was inspired by the experience of H.E. Prof. Jamal Sanad Al-Suwaidi, Director General of the Emirates Center for Strategic Studies and Research (ECSSR), and Chairman of the Board of Directors of the Cancer Patient Care Society, “Rahma”, in facing cancer and overcoming it.