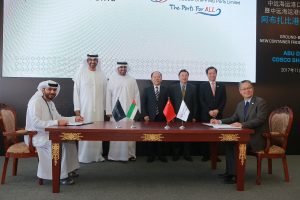 The ground-breaking ceremony was presided over by H.E Dr. Sultan Ahmed Al Jaber, Minister of State and Chairman of Abu Dhabi Ports and H.E. Ning Jizhe, Deputy Director of China’s National Development and Reform Commission (“NDRC”) who witnessed the unveiling of the ground-breaking plaque as well as the signing ceremony for the new CFS by Captain Mohamed Juma Al Shamisi, CEO of Abu Dhabi Ports and Mr. Zhang Wei, Vice Chairman and Managing Director of COSCO SHIPPING Ports Limited.

Speaking on the occasion of the groundbreaking, H.E. Dr. Sultan Ahmed Al Jaber said “Following the guidance and vision of the leadership, Abu Dhabi Ports has played an important role in expanding trading links between the UAE and China, which is now the UAE’s second largest trading partner. The partnership between Abu Dhabi Ports and COSCO SHIPPING Ports to develop the region’s largest container freight station will add a new dimension to UAE/China trade relations and is fully aligned with Abu Dhabi’s Vision 2030 to drive growth, attract investment, support economic diversification and create sustainable jobs.”

H.E. Jizhe expressed his view that, “Khalifa Port is one of the fastest growing ports and an important gateway port in the region, with huge potential and prospect. COSCO SHIPPING Ports is marching another step forward in the port development project with Abu Dhabi Ports. The solid progression of the CFS project writes a new chapter between China and the UAE, in terms of infrastructure investment, construction and service sector, and bears new fruit for The Belt and Road cooperation between the two countries, injecting new energy to solidify and promote China-UAE economic and trade cooperation, thus providing new contributions”.

Capt. Xu Lirong, Chairman of COSCO SHIPPING said “China and UAE’s growing relationship in recent years has created favourable environment and conditions for the cooperation between the two countries in the port and shipping industries. Khalifa Port is an important gateway in Abu Dhabi, an important hub in the Middle East, and a major focal point for ‘Belt and Road’, thus plays a significant role in the shipping industry. The signing of the agreement on CSP Abu Dhabi CFS project will further strengthen the services of the terminal and enhance the trade cooperation between the two countries. Port business is the core resources of COSCO SHIPPING, it is the foundation and strategic support of our global network. The stable development of the port business will bring mutual benefits to our shipping business and other business in upstream and downstream. “

Captain Al Shamisi, expressed his happiness in the ground-breaking ceremony and the signing of the new agreement, and praised COSCO SHIPPING Ports on their decision to take Khalifa Port as a hub for their operations in the region. Commenting on the dual achievements said, “Khalifa Port is considered to be one of the most important and advanced ports in the Middle East, considering its world-class infrastructure, strategic location that connects customers to the rest of the world. Last year, Abu Dhabi Ports signed with CSP, the world’s largest container operator, who chose Khalifa Port as the hub for its operations in the Middle East, and with CSP on board, we expect to raise the annual capacity of Khalifa Port to 6 million TEUs. This marks a significant leap in the expansion of the Port, transfer of goods and reduction of costs. In addition to attracting investors from Eastern Asia, it will increase Khalifa Ports’ competitiveness and ease the way for more partnerships with companies and friends in China and East Asia, which will draw further investments into Abu Dhabi. Our strategy is paying off as business continues to flourish and grow ahead of our competition and we strengthen our grip and positioning as a strong player in the international market place”