Agreement Signed Between Adcci And Kizad 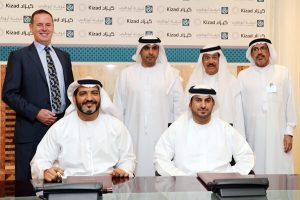 A MoU (memorandum of understanding) has been signed at the Abu Dhabi Chamber of Commerce & Industry (ADCCI) premises between the ADCCI and Kizad (Khalifa Industrial Zone Abu Dhabi). It is intended to enhance the two parties’ efforts to help lay down a base for sustainable growth that would encourage Abu Dhabi’s economic expansion by means of developing major projects in co-operation with the private sector in regards to ports and industrial zones sectors.

The agreement was signed for the Chamber by HE Mohamed Helal Al Muhairi, ADCCI Deputy DG, and for Kizad by Khaled Salmeen, Executive Vice President Industrial Zones at ADPC, in the presence of HE Mohamed Rashed Al Hameli, ADCCI Director General, and Tony Douglas, CEO of ADPC (Abu Dhabi Ports Company).

Praising the pivotal and key role being assumed by both ADPC and Kizad in providing the infrastructure, services and facilities to local and foreign investors, Mr. Al Hameli said: “Signing this MoU with Kizad is within the framework of the Chamber’s endeavour to reinforce its partnerships and to bring its services across to all industrial companies and businesses operating in Abu Dhabi at sites and locations close to these companies and firms”.

Requests and transactions of both ADPC and Kizad customers, by virtue of this agreement, will be accomplished in an easier manner. Moreover, the Chamber will endorse all free zone industrial, trade and services licenses issued by Kizad in accordance with the licensing regulations and rules applicable in Abu Dhabi, he noted, stressing that “ADCCI will work with both ADPC and Kizad on boosting foreign investments and promoting services and facilities made available by ADPC in a way that would help attract foreign companies, businesses and businessmen to invest in Kizad”.

“The Chamber will do that through economic delegations visiting it, through economic missions dispatched by the ADCCI in furtherance of Abu Dhabi’s economic and investment relations with various countries of the world, as well as through its continuous participation in Arab, regional and international exhibitions and conferences specialized in business and investment”, Mr. Al Hameli pointed out.

For his own part, Kizad’s Executive Vice President, Khaled Salmeen said: “The MoU between the Abu Dhabi Chamber and Kizad is an extension to the existing close relationship between the two parties. In addition, given that the Abu Dhabi Chamber is one of the entities concerned with developing and improving commercial and industrial services in Abu Dhabi, it has been very important to sign a joint co-operation agreement, which aims at reactivating and facilitating both the systems of the business environment and the procedures of granting trade licenses to investors and customers dealing with Kizad”.

“ADPC has recently commenced local and global marketing and promotion for Kizad and Khalifa Port based in Al Taweela. Early positive indicators have started to reach us via international investment organizations and entities that have shown a marked interest in the projects. We have just begun promoting internationally and will work together with a number of organizations to spread our message in leading global markets. This agreement with the Abu Dhabi Chamber of Commerce is a major step forward in this endeavour”, Mr Salmeen noted.