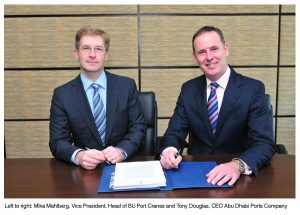 ADPC has awarded an AED 430 million ($US 116.98 million) contract to Konecranes Finland Corporation for stacking cranes to be used at Khalifa Port, Al Taweelah. The contract covers 30 automated cranes which will be used for stacking containers for the semi-automated container terminal being planned there. The cranes will be delivered in two batches to Khalifa Port: 14 units will be delivered at the end of March 2012 and 16 units at the end of June 2012. ADPC CEO, Tony Douglas, said : “We are delighted to sign this contract which marks another milestone in our journey to have the first phase of the port ready by Q4 2012. Konecranes will deliver their units on time and to budget and are another of our key partners in realizing this flagship project.” “This is a very important order for Konecranes,” said Niklas Brönn, Managing Director of Konecranes Middle East FZE in the UAE. “The interest for automated terminals is increasing and Konecranes has a proven crane solution for these.”

The order marks the first Konecranes’ ASC cranes to be delivered to the Middle East. The company is based in Helsinki and has previously delivered ASC cranes to a container terminal in Virginia, USA with another 36 on order to be delivered to a terminal in Barcelona, Spain. Konecranes will co-operate closely on the project with Zebra, one of the global leaders in ports automation, as well as with General Electric, which will supply the electrical and control equipment. The ASCs have a lifting capacity of 40 tons and are equipped with an active load control, active sway prevention and horizontal fine positioning systems ensuring efficient and uninterrupted use both automatically and remotely. A major advantage of active load control is the light crane weight due to the intelligent trolley design. This contributes to a lower energy requirement, higher efficiency, and reduced operating costs. Konecranes‘adaptive automation enables box handling without trolley and gantry inching, so reducing cycle times and saving energy.