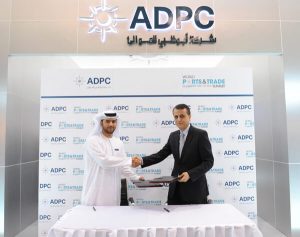 Abu Dhabi Ports Company (ADPC) has announced tug boat and pilot boat contracts worth AED 66 million for Khalifa Port with two Emirati boat building companies. Riviera Boat Industrial Investment (based in Sharjah) has been appointed to build one pilot boat, and Grandweld (based in Dubai) has been appointed to build two tug boats for the first phase of the port project.

The signing ceremony took place today at the World Ports and Trade Summit in Abu Dhabi, of which ADPC are the hosts, following a competitive international tender process.

The three vessels will operate in Khalifa Port, Phase 1 of which is being constructed adjacent to the Kizad (Khalifa Industrial Zone Abu Dhabi) site at Taweelah. The first phases of both mega-projects will see their infrastructure completed by Q4 2012, with Phase 1 of Khalifa Port able to handle 2 million TEUS and 12 million tonnes of cargo.

Commenting on the order, Capt Mohamed Al Shamisi, Vice President of Ports Operations, ADPC, said: “This is a milestone order not only for Khalifa Port but also for ADPC. The Emirati yards in question build consistently excellent quality vessels and the contracts pave the way for the exciting full opening of Khalifa Port’s first phase. The fact that ADPC has placed these orders emphasises our full commitment to completing the infrastructure and superstructure to Khalifa Port Phase 1 to budget and on time”.

Riviera has been contracted to build one 18 metre pilot boat, available from the end of February 2012, with a speed of 21 knots, at a cost of approximately AED 5 million (just over USD 1 million). The pilot boat will be used for port pilotage operations in harbour and coastal waters.

Grandweld will build two tug boats, each with a bollard pull of 55 tonnes, a length of 32 metres and a speed of 12.5 knots. Both tugs will operate in Khalifa Port from Q4 2012 and will be capable of berthing/un-berthing, escorting vessels and fire fighting on a 24 hour basis. The cost for both tug boats is AED 61 million (nearly USD 17 million).

All three boats will be ready to escort ships into Khalifa Port from Q4 2012. They will also be able to assist ships berthing at the dedicated EMAL (Emirates Aluminium) facility in Khalifa Port, which has been in operation, receiving raw material, since November 2010.