ADPC announces letter of intent for operator of Khalifa Port 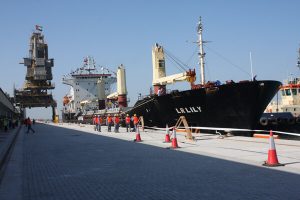 ADPC (Abu Dhabi Ports Company) today (28 March) signed a letter of intent to award the contract for Khalifa Port operations to ADT (Abu Dhabi Terminals) when phase 1 of the port opens for business in Q4 2012.

Announcing the decision on the first day of the World Ports and Trade Summit being held at ADNEC (Abu Dhabi Exhibition Center) this week, Tony Douglas, CEO of ADPC said: “This news signals the latest stage of our plans for Khalifa Port which is well on target for completion late next year. Construction is 68 per cent complete and the announcement of intent to appoint ADT so well in advance of the opening will help in the development of strategy and business planning for the benefit of future customers.”

Martijn Van de Linde, CEO of ADT added: “I am delighted that ADT is the intended operator of Khalifa Port which will be one of the most modern in the region and the first semi-automated port operation for thousands of miles. I look forward to working closely with ADPC over the next year in the run up to the opening and contributing to the ongoing development of infrastructure in Abu Dhabi.”

Khalifa Port is situated half way between Abu Dhabi and Dubai at Taweelah. The first phase has a capacity of 2 million containers and 12 million tons of cargo a year. It will provide port services for Khalifa Industrial Zone Abu Dhabi (Kizad) when it also opens in Q4 2012.