General cargo volumes rose to 37 million metric tonnes in year-to-date September 2021, up from 22 million metric tonnes in the same period in 2020 while industrial zones leased about 2.7 million sq. metres of land in this period, reflecting the wider global recovery from the impact of the COVID-19 pandemic, although some supply chain issues remain.

Container throughput grew to 2.47 million TEUs (twenty-foot equivalent units) in the first nine months of 2021, up from 2.42 million TEUs in the same period in 2020, despite the ongoing supply constraints faced in the global shipping and container market.

Captain Mohamed Juma Al Shamsi, Group CEO, AD Ports Group, said: “We reported solid results for the nine months ended September 30, 2021, due to continuing growth in our core businesses and incremental returns from new investments. We are well-positioned for sustained growth as the world economy recovers from the impact of the global pandemic and as we take an active role in helping to resolve global supply chain issues. Our commitment to contribute to Abu Dhabi’s and the UAE’s economic development is stronger than ever.”

Operational highlights from the period included the signing of a concession agreement with CMA CGM Group in July 2021 to establish a new terminal in Khalifa Port. AD Ports Group also signed a Heads of Terms agreement with Aqaba Development Corporation to build and operate a new cruise terminal at the Port of Aqaba, Jordan, the first of its kind in the country and AD Ports Group’s first cruise facility outside the UAE. In addition, the Group signed a preliminary agreement with the General Company for Ports of Iraq (GCPI), to explore potential opportunities in the transportation and maritime sectors.

Martin Aarup, Group Chief Financial Officer, AD Ports Group, said: “We have maintained our focus on delivering stable returns, building on the firm foundation of our long-term contracts backed by a prudent investment strategy. We are beginning to realise returns from our new investments, joint ventures and partnerships across feedering, offshore and transhipment services as well as from our expansion of logistics services. Our invested capital increased to AED 23 billion (USD 6.3 billion) in the first nine months of 2021, up from AED 19.9 billion (USD 5.4 billion) in the same period in 2020, in line with our ongoing expansion programme.” 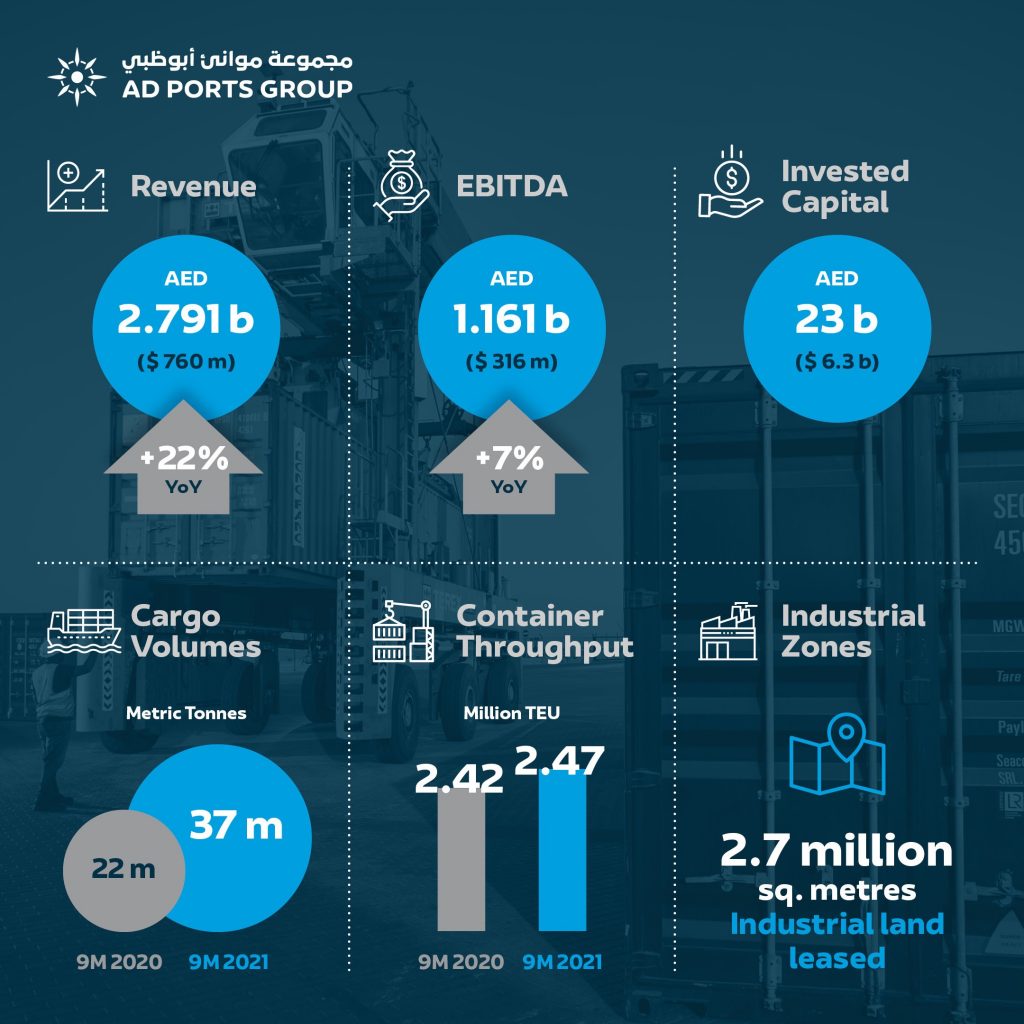