Under the terms of the agreement, a new terminal will be established in Khalifa Port, the first semi-automated container port in the GCC region, which will be managed by a joint venture owned by CMA CGM’s subsidiary CMA Terminals (with a 70 percent stake) and AD Ports Group (30 percent stake). The partners are expected to commit approximately AED 570 million (USD 154 million) to the project.

With construction starting in 2021, the new terminal is set to be handed over in 2024 with, in phase 1, an initial quay length of 800 metres and an estimated annual capacity of 1.8 million TEUs. AD Ports Group will be responsible for developing a wide range of supporting marine works and infrastructure. This includes up to a total of 1,200 metres of quay wall, a 3,800-metre breakwater, a fully built-out rail platform, and 700,000sqm of terminal yard.

The terminal will provide CMA CGM with a new regional hub and will enable the Group to develop its service offering between Abu Dhabi and South Asia, Western Asia, East Africa, Europe and the Mediterranean as well as the Middle East and the Indian sub-continent.

With this major investment, the CMA CGM Group pushes ahead with its global expansion strategy as a leading terminal operator. The Group currently operates 49 port terminals in 27 countries via its subsidiaries CMA Terminals and Terminal Link. 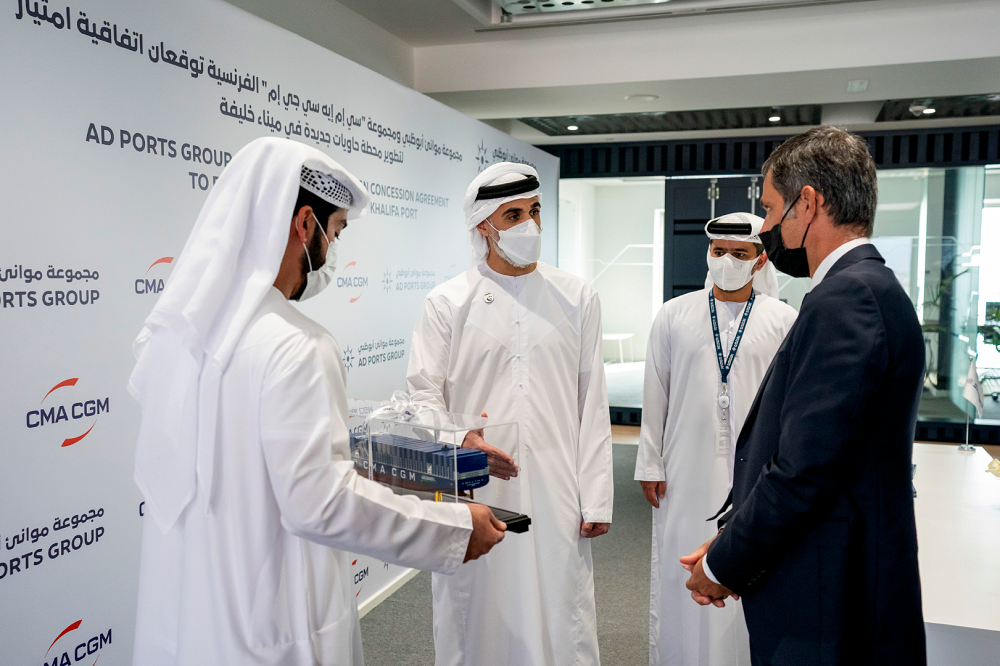 Khalifa Port, a hub for three of the world’s top four shipping companies.

CMA CGM Group is the third of the world’s top-four shipping entities to join forces with Abu Dhabi’s leading facilitator of trade, logistics and industry. The agreement confirms Khalifa Port’s standing as one of only a few major ports in the world providing hubs for three of the world’s top shipping lines, as well as serving as an instrumental part of the global maritime trade connecting markets from east to west.

CMA CGM, a committed partner to the UAE’s economy

The UAE and Abu Dhabi’s central geographical location, at the center of international trade routes, enables the CMA CGM Group to implement strategic development plans, strengthening its position in the Gulf and providing the best services to meet its customers’ needs.

Present in the UAE for 15 years, the CMA CGM Group employs around 450 people working within 10 offices to provide customers with the best maritime and logistics service solutions. The Group connects the UAE to the world with 13 weekly services to 9 ports.

H.E. Falah Mohammed Al Ahbabi, Chairman of AD Ports Group, said: “One of the key factors that has greatly contributed to the economic growth of Abu Dhabi and the UAE has been our stable economic environment that is ripe for foreign investment. Coupled with competitive free zone and business engagement initiatives that aid foreign businesses in establishing a presence in the country with ease, the UAE has become a key investment destination among many of the world’s leading players seeking to extend their reach into the Middle East.

“This landmark agreement with the CMA CGM Group is a prime example of those continued efforts and one that will significantly accelerate trade and the development of industry in the UAE and beyond.”

“As well as driving increased trade volumes through our port and elevating the UAE’s economic development, we expect the facility’s capacity and added trade links with other high-profile port destinations will drive investment into local businesses and our industrial zones, fast-track the development of key sectors including manufacturing and logistics, and raise demand for manpower.”

“This agreement will aid us to realise our long-term ambitions to become a top 10 ports, industrial, and logistics operator by expanding our capacity and growth across the region and beyond. In all, we project that over the next five years the CMA Terminals joint venture will drive the further development of the Khalifa Industrial Zone Abu Dhabi (KIZAD), while simultaneously contributing significantly to the national GDP.””

Captain Mohamed Juma Al Shamisi, Group CEO, AD Ports Group, said: “The addition of a new container terminal at Khalifa Port, which will be managed by a joint venture formed in collaboration with CMA Terminals, opens a new chapter in our organisation’s efforts to become a key facilitator of global trade, and elevates Abu Dhabi’s standing as both a regional and an international hub for maritime trade.

“With the addition of another leading worldwide shipping group company, will make Khalifa Port a hub for three of the world’s top four shipping companies. This addition creates opportunities to open trade routes to new markets in Europe, Africa, Western Asia, and South Asia. At home, we expect the presence of the shipping line terminal, which will link directly to Khalifa Port’s upcoming rail terminal and utilise its services, to accelerate trade flows moving in and out of the UAE, while also encouraging CMA CGM Group’s customers to consider establishing a presence in Abu Dhabi.”

Rodolphe Saadé, Chairman and Chief Executive Officer of the CMA CGM Group, said: “The ambitious project we are launching in Abu Dhabi marks an important milestone in CMA CGM’s development strategy in the region.

This state-of-the-art terminal will contribute to enhancing Khalifa Port’s position as a leading global hub and to boosting the region’s economy, accelerating trade flows in and out of Abu Dhabi.

It will also enable our Group to expand its shipping and logistics network in the region, where we see a lot of growth potential.”