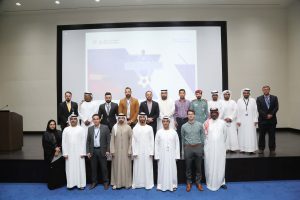 Celebrating the Year of Zayed, Abu Dhabi Ports drew the teams who will be participating in the third “Stakeholders five-a-side football tournament”, held this year for the first time in cooperation with MICCO Logistics. The draw was held at Abu Dhabi Ports headquarters in the presence of the 18 teams that will compete in the tournament next month.

During the draw, rules and regulations of the tournament in both Arabic and English were distributed amongst team representatives. These rules are in line with the International Federation for five-a-side football that govern all matches with the exception of what is highlighted in the list prepared by Abu Dhabi Ports in cooperation with Abu Dhabi Sports Council.

The tournament will commence at Zayed Port field on 5th February. 4-5 matches will be played each day during the competition that will last for three weeks. Each match lasts for 20 minutes divided into two halves with a 5-minute intermission between the halves. Two teams with the highest scored points will qualify for the 8th round, where they play four matches to have four teams qualify for the semi-finals. Two matches will then be played and winners will qualify for the final whilst losing teams will compete for third and fourth place.

Hamad Al Nahdi, Head of the organizing committee for the tournament, praised the encouraging feedback received by Abu Dhabi Ports from partners for this competition and said, “The support of our stakeholders from the public and private sector has been exceptional this year, highlighting the keenness of our partners to ensure football and other sporting activities achieve the desired results and bring greater benefits to all participants.”

“Abu Dhabi Ports recognizes the importance of engaging with our stakeholders in a way that is both healthy and fun, outside the boardrooms and official circles and the Football Tournament is one of the key activities that we are keen to develop in a big way in the coming years for the happiness of all our stakeholders whilst motivating the spirit of competition amongst our partners because all teams are highly competitive and take the challenge very seriously. We see Football as the best way to do this. Abu Dhabi Ports is grateful for all entities who supported this tournament and we wish all teams all the luck in this exciting competition”, he added.

At the end of the tournament, valuable prizes will be granted to the three winning teams. This year’s challenge will also include new categories of awards that include best player in the tournament, the best goalkeeper, and the ideal team.