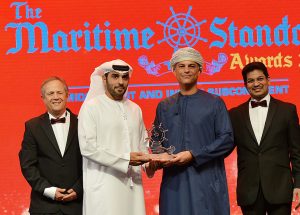 Abu Dhabi Ports, the master developer, operator and manager of the Emirate’s commercial and community ports as well as Khalifa Industrial Zone (KIZAD), received two prestigious awards at the Maritime Standards Awards, a premiere shipping and maritime awards event which recognises the achievements of the industry’s most outstanding performers across the Middle East and India.

Recipients in 19 categories were chosen by an expert panel of judges drawn from different industry sectors, all with a track record of excellence in their chosen fields. Abu Dhabi Ports’ awards included:

• The Port of the Year Award: Abu Dhabi Ports was recognised for making the biggest contribution to the development of port infrastructure according to the highest international standards to serve the Middle East and Indian subcontinent. The Port operator was also recognised for its innovative digital solutions for trade and port communities such as Silsal, a blockchain-based solution aimed at streamlining trade flows and supply chains that will soon be piloted internationally. 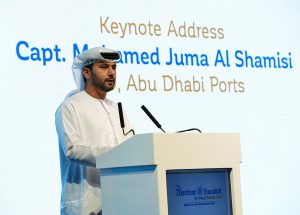 Captain Mohamed Juma Al Shamisi, CEO of Abu Dhabi Ports, said: “We are proud to have been honoured at the Maritime Standards Awards for our contribution to the growth of the region’s maritime industry. In recent years we have helped Abu Dhabi adapt to the transformation of the global maritime sector, resulting in reduced costs, better management of capacity and improved efficiencies. Looking ahead, our focus is to position ourselves at the forefront of disruption by harnessing innovative emerging technologies.”

“These awards are a reflection of the hard work and dedication of the team at Abu Dhabi Ports and our subsidiaries as we strive to transform the maritime industry in Abu Dhabi. Our goal is to build resilience in adversity, helping to realise the vision of our Emirate’s Leaders of a strong, diversified, knowledge-driven economy.”

The awards were presented in front of some 800 high-level executives from the worlds of shipping, ports, shipbuilding and repair and other maritime sectors, along with leading figures from governmental agencies and international industry bodies.

Abu Dhabi Ports is no stranger to success at the Maritime Standards Awards, having been honoured as Port of the Year three times before – in 2014, 2015, and 2017.

For more details on the awards, visit: www.tmsawards.com