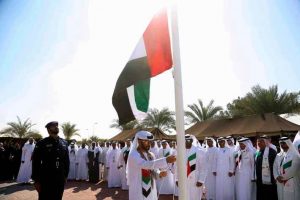 Abu Dhabi Ports, the master developer, operator and manager of the Emirate’s commercial and community ports as well as Khalifa Industrial Zone, has observed Commemoration Day and celebrated the UAE’s 45th National Day on November 30.

Held at Abu Dhabi Ports’ offices at Al Taweelah, the event was kicked off with flying the UAE flag at half-mast from 8:00am, and was raised again at 11:30 as staff observed a moment of silence and quiet prayer to pay tribute to the country’s heroes who will forever be remembered for their sacrifices, loyalty and dedication.

Followed by a celebration of the UAE’s National Day, the event featured a musical performance by children of Al Noor Training Centre for Children with Special Needs, as well as poetry sessions conducted by seasoned poets and Abu Dhabi Ports staff, folklore dances such as Al Harbya, Al Yola, and Al Haban, and a heritage village that showcased the UAE’s authentic culture and traditions. A number of school students have also participated at the event where they have put together a folklore show and an art exhibition.

Capt. Al Shamisi said: “The UAE’s National Day reflects the solidarity of its people and the vision of its wise leadership represented by His Highness Sheikh Khalifa bin Zayed Al Nahyan, who has invested in the nation’s natural and human resources with the aim of reinforcing the UAE’s position as a leading country regionally and internationally. Today, we, at Abu Dhabi Ports, work diligently to sustain the development of the UAE, a journey that has started 45 years ago, and realise the vision of His Highness Sheikh Khalifa through representing Abu Dhabi in the maritime sector on a local, regional, and international level.”

As part of Abu Dhabi Ports’ social corporate responsibility programme, and in collaboration with the General Women’s Union, Al Noor Training Centre for Children with Special Needs participated at the event and sold their handmade crafts, from which the money raised will be used to support the Productive Families Program.