Held in partnership with MICCO Logistics, tournament features 18 teams and more than 180 players 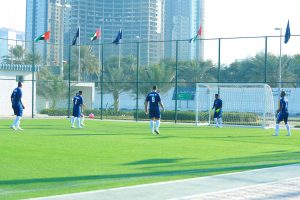 In cooperation with MICCO Logistics, Abu Dhabi Ports launched its third annual Stakeholders Football Tournament. The five-a-side tournament will take place over three weeks, with MICCO Logistics and the Department of Tourism and Culture going head to head in the kick-off match at the Zayed Port football field.

The tournament features 18 teams and more than 180 players representing sectors as diverse as maritime, media, construction and logistics, as well as Abu Dhabi government entities. The tournament is part of Abu Dhabi Ports’ strategy to engage with customers, partners and the community in unique and interactive ways.

Commenting on the tournament, Hamad Al Shabibi, Head of the Organizing Committee at Abu Dhabi Ports, said: “We are thrilled with the response of our stakeholders to participate in this tournament. We fully expect to see both team spirit and competitiveness amongst the teams and players, but our aspiration is that new relationships will also be forged and reflected off the pitch. We wish all the players and teams luck for the tournament.”

Teams will play five-a-side in four groups that were drawn up earlier in the year, in accordance with rules and regulations prepared by Abu Dhabi Ports in cooperation with Abu Dhabi Sports Council.

Captain Abder Rahman Simreen, the Managing Director of MICCO Logistics, said: “We are proud to partner with Abu Dhabi Ports for this tournament. It is a great way for the Abu Dhabi business community to come together, build more robust partnerships and create a true spirit of sportsmanship.”

Four to five matches will take place daily over the of the three-week tournament at the Zayed Port football field. During the tournament, teams from each group will play 10-minute matches in each half of the game. The final match will take place on the 26 February, after the four final teams battle it out for the championship. The top three teams will receive prizes, and all tournament players will have the chance to claim awards for ‘Best Player of the tournament’, Best Goalkeeper’, and the ‘Best team’.