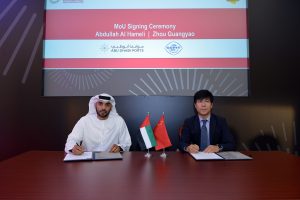 Abu Dhabi Ports inked a new agreement with the China Council for the Promotion of International Trade to explore new commercial opportunities between Chinese companies interested in investing in Khalifa Industrial Zone Abu Dhabi (KIZAD) and Khalifa Port Free Trade Zone (KPFTZ), which is considered the largest free trade zone in the region.

The Memorandum of Understanding (MoU) was signed by Abdulla Al Hameli, Executive Vice President – Corporate Support at Abu Dhabi Ports and Zhou Guangyao, Representative of the China Council for the Promotion of International Trade for the GCC region. The agreement was signed on the side-lines of the ‘KIZAD Business Week’, which was a series of exclusive business and networking events organised by Khalifa Industrial Zone Abu Dhabi (KIZAD), a subsidiary of Abu Dhabi Ports.

The conference, organised in cooperation with the Chinese Business Council, brought together over 100 businessmen and investors, in addition to high-level officials and diplomates from the Chinese embassy and consulate in the UAE, and representatives from multiple Chinese provinces.

Following the signature, Abdulla Al Hameli, Executive Vice President – Corporate Support, commented: “A spirit of collaboration and the values of mutual respect and ambition have always driven our strategy at Abu Dhabi Ports. This is perhaps best demonstrated through our deepening ties with China. Last year alone, with the support and guidance from the leadership of the UAE, Abu Dhabi Ports signed a 50-year agreement with the Jiangsu province in China, bringing in AED 1.1 billion into the Khalifa Port Free Trade Zone in Abu Dhabi, the largest free zone in the region. Furthermore, COSCO Shipping, the world’s largest container operator, chose Khalifa Port as the base for its operations in the region, driving volumes higher in the upcoming period.”
“We are confident this MoU will mark yet a new turning point and anticipate new and fruitful partnerships for both our countries.”

The KIZAD Business Week event series has been organised in collaboration with multiple business councils to introduce KIZAD and Abu Dhabi Ports’ assets, products and service offering to a broader business audience. It offers a valuable opportunity for businesses, investors and stakeholders to come together and discuss opportunities and challenges in free zones and how zones like KIZAD and Khalifa Port Free Trade Zone (KPFTZ) can address these issues.