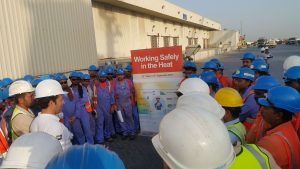 Abu Dhabi Ports, the master developer, operator and manager of commercial and community ports within the emirate of Abu Dhabi, in addition to Fujairah Terminals at the Port of Fujairah, and Khalifa Industrial Zone Abu Dhabi (KIZAD), celebrated achieving zero health-related illness cases this summer at the end of its “Working Safely in the Heat” campaign. The company also recorded zero Lost Time Injuries (LTI) as a result of heat stress.

The annual campaign was launched at the end of May and continue until Sep. 2017 in collaboration with OSHAD for the fifth consecutive year to educate Abu Dhabi Ports’ employees on heat illnesses and possible ways of to prevent them.

During the course of the campaign, the company conducted over 1,300 awareness sessions across its numerous locations, which is more than ten times the number of sessions that took place last year. Topics addressed at the sessions included risks associated with heat, how to avoid heat stress, the importance of a healthy lifestyle including balanced diets, proper sleep, hygiene as well as hydration for workers.

Abu Dhabi Ports also announced that the number of staff who attended the awareness sessions employees, contractors, Port Users and Truck Drivers has doubled from 3,468 in 2016 to 7,597 in 2017 . This exceeds the original target announced at the launch of the campaign to communicate campaign messages to 4,000 employees. Zero Lost Time Incident Cases reported during the whole summer period.

In addition to the education sessions the campaign included a site inspection with management walkabout to Abu Dhabi Ports’ workplaces to monitor employee welfare in compliance with the ‘Working Safely in the Heat’ guidelines.

Commenting on the success of the campaign, Abdulkareem Al Masabi Executive Vice President – Ports, said: “We are very proud of these results as they showcase commitment from Abu Dhabi Ports to ensure the welfare of our employees contractor, Port Users and Truck Drivers. This campaign addresses a vital concern that is prevalent across the UAE and we hope that we have emphasized the importance of self-care and health illness early detection and prevention, to our workers. We will, of course, continue to safeguard our employees’ health and utilise whatever tools needed to create a safe and happy working environment for them.”