The Department of Economic Development (DED) in Abu Dhabi has signed a partnership agreement with Kizad industrial zone, a wholly-owned subsidiary of Abu Dhabi Ports Company (ADPC), and the Higher Corporation for Specialized Economic Zones, with a view to simplifying and facilitating the greater ease of issuing of business licenses in the emirate of Abu Dhabi.

A major element of the initiative – to enhance the level of services provided to investors – has been the introduction of electronic systems that contribute to greater speed, activation and simplification of business registration and licensing procedures, in Abu Dhabi.

“These two agreements are the result of working towards the building of a complementary framework to meet the strategic modernisation and economic development being carried out by the emirate, to enhance the efficiency of government performance and increase the effectiveness of their services to the business sector.”

His Excellency, the Undersecretary, also noted that in order to strengthen the offering of a business-friendly environment, in the emirate, will require effective and ongoing co-operation between governmental, semi-governmental, and private sector organisations.

Under the provisions and aims of the Abu Dhabi Vision 2030, Abu Dhabi is aiming to be a key business centre for attracting investments into the region and create a platform for sustainable economic development for the country’s future.

He explained that the two agreements with the Higher Corporation for Specialized Economic Zones and “Kizad” are a result of joint work and integration among government agencies to achieve the goals and determinants of Abu Dhabi Economic Vision 2030, which focused on the development of the industry and make it play a pivotal role in achieving sustainable economic development.

Khaled Salmeen, CEO and managing director of Kizad paid tribute to the DED’s successes and efforts that have already been recognised as steering and keeping the Abu Dhabi Economic Vision 2030 on course. Salmeen also offered special thanks to the General Secretariat of the Executive Council, with particular reference to the recent announcement that Al Gharbia (The Western Region) is to receive a AED330 billion investment over the next five years – to support and develop the region’s six community and commercial ports.

According to Salmeen, the contribution of Kizad in achieving economic diversification for the Emirate of Abu Dhabi, away from traditional oil-generated GDP, has started to bear fruit. Huge multi-million dollar investments have already been committed to plots in Kizad’s innovative industrial clusters and embracing the convenience of Abu Dhabi’s new state-of-the-art, deep-water, Khalifa Port.

Salmeen also stressed the importance of investing in customer service and considered it one of the main drivers of success, adding:

“We give customer service high priority and thus created the one-stop shop service center in Taweelah. We provide more than 300 services, all available to the customer in one-stop-shop; an important service and pillar in supporting the aims of creating greater ease of doing business for our investors.”

Khalifa Port, Abu Dhabi’s flagship commercial maritime gateway, operational since September 2012, serves Kizad, Abu Dhabi, and the UAE as a whole, via a fully-integrated multimodal network of land, sea and air transport infrastructure. A design clearly based around fulfilling the targets set out by the “Abu Dhabi Economic Vision 2030” 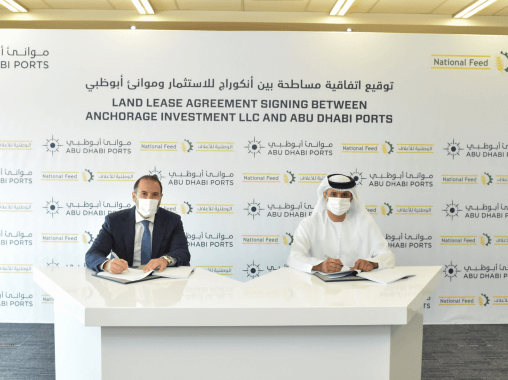